skip to main | skip to sidebar

Two and a half years have passed by since I have posted an update on this blog. I apologize to anyone who has laid patiently in wait for the completion of our restoration. The funny thing about boats is that most of the time you spend thinking about them, or working on them means actually progress on the project is that work is getting done. We have gotten a lot of work done.
Margaret sat in our yard in the upper 9th ward for just under two years. The boat needed an incredible amount of work. The bulkhead was rotted out, as was the core. A single non stainless bolt bedded through the deck was the culprit of much of the damage, as was Katrina. The aft port side corner was ripped from the boat, and the rudder was no where to be seen when we went to collect Margaret from Mobile bay. The interior was full of water, and all of the lower bulk heads were in various stages of rot. 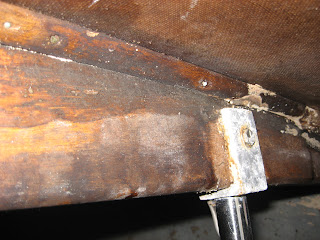 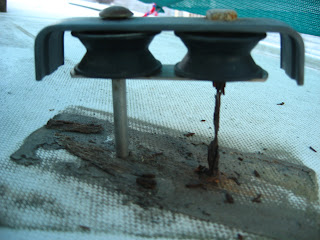 Fortunately for us, we didn't get in over our heads. Bill Lapworths approach for the Cal 20 was as a very simple design, and accessible boat. This translated to very straight forward repairs. Unfortunately as anyone knows, a core repair of any boat is fraught with problems. We eventually got the core in, nice new bulkheads crafted, new electronics, a re-bedded keel, anti-fouling paint, and deck paint on the boat. we rigged her, and set sail on Friday, May 13th of 2011. 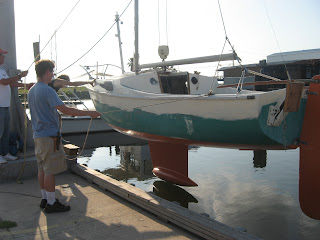 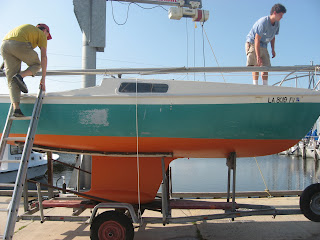 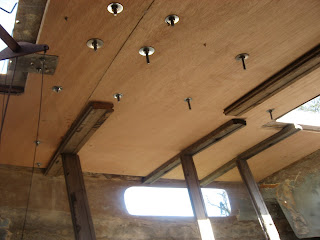 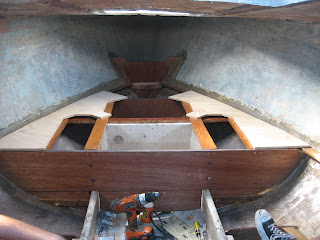 Margaret didn't spend much time last summer at her berth in South Shore Harbor. We sailed that boat 3 or 4 days out of the week, and took several multi day sails around the lake and out into the gulf. We have been thrilled at how she handles.
Right now she is back in the yard for some final touch-ups and key additions. We have recently added a set of solar panels and controller to keep her battery topped off. New hull paint, windows, a second rudder and tiller, plus a slew of up-to-date electronics have found their way into her tiny 7 feet of beam.
So we plan on setting sail for the next couple of months. A bit of time in the gulf, and hopefully a good amount of time around the Bahamas.
Posted by Benjamin at Wednesday, December 07, 2011 2 comments:

Sailboat Restoration: How a free sailboat fell into our lap.

I have always dreamed of owning a sailboat. I have never been close to this goal before. In fact I had only been on one sailboat that I didn't even get to sail on. Now that has all changed. Say hello to Margaret: 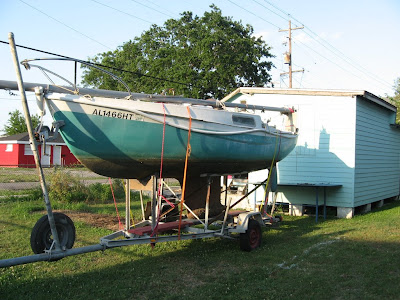 So the story goes: Luke, Walker and myself (Benjamin) got all caught up in the idea of getting a sailboat. We wanted one that we could keep at the house, a live aboard, drink aboard, and generally another place to hang out at home.
Luke and I rode Bonnie to Mobile, AL to get the first glimpse of our new boat: 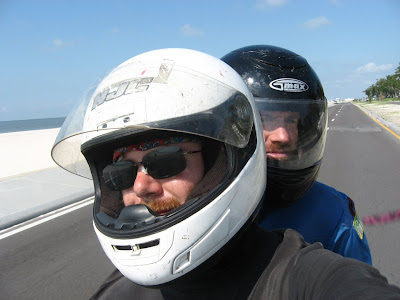 There wasn't much time for photos when we arrived, beacause we had to work, and work fast. I got a couple of shots on the computer, but unfortunately I lost some while transfering.
Here is the group of 3 Cal 20's that had been abandoned after hurricane Katrina. 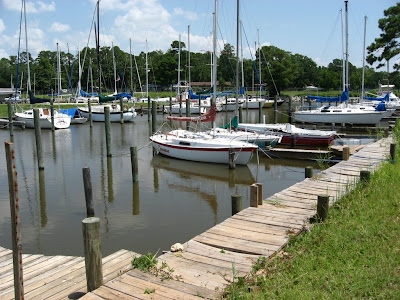 Climb aboard if you dare: 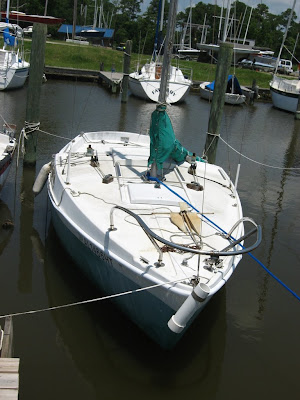 When we showed up Margarets owner was already there. We had arranged this, as we were not doing a come by in the dark of night and cut the lines kinda pickup. Rodney Majure had sailed Margaret competitively, and became her owner after his father-in-law passed away. This was after Katrina, and Margaret was in need of a lot more than TLC. As the years slipped by, Rodney realized that he was never going to get Margaret back up and running. Fast forward to where we come in. When we started our search for boats, the most logical place to look was at the harbors in New Orleans. We ran into Buzzy the manager of the New Orleans Yacht Club that day, and she suggested that we post to the clubs forum that we were looking for a boat. She talked up the forum and put up a quick line saying we were looking for a project boat.
We got one response from the post. A fella named Tom replied that the Bucanner Yacht Club in Mobile, Alabama had a couple of abandoned boats they were ready to get rid of. We considered it, but didn't jump on it. We had no photos of the boats, and Tom unfortunately couldn't get any to us. I considered riding out there and camping overnight so we could have some first hand idea of this as a possibility, but I didn't do that though. Instead we combed through the marinas in Louisiana, and one in Mississippi.
At one point we had made and offer on a boat that was accepted. We were ready to pay for this boat, when the seller contacted me and informed us that he regretable had to take the boat off the market, becuase his friends house had just burnt down and they needed a place to live. We were almost prepared for this to happen. There seemed to be an unspoken curse going on around us, and it seemed like everybody who showed us a boat fell victim to some tragedy.
The 2nd boat we climbed aboard caught fire after the captain closed a metal hatch on the cord of the solar battery tender. That ended our interest in that boat.
Another captain had driven 20 miles out of his way to show us this beautiful wooden boat. 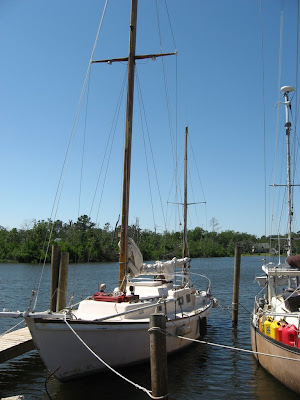 We were following the captain into the marina, and as he swumg around the corner into the entrance he ran into an alligator. The alligator was fine, becuase it was all sealed up in a cage that was connected to a park and wildlife rangers truck, which is really what he hit. You guessed it, the police were called, and in the meantime we went and looked at more boats. 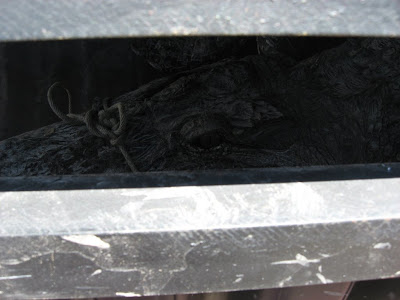 There was actually 2 gators in the cage: 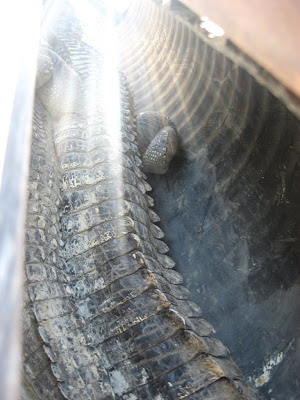 I am just glad we didn't climp aboard the last boat we looked at and go sailing on a dark and stormy evening. We might have wound up dead.
After looking at that last boat, and talking about it in the evening, we realized that if we were to buy any of the boats we were looking at, they would all require us to invest more money into them. I think the line goes, the 2 happiest days of a boat owners life are the day you buy your boat, and the day you sell it. So Margaret chose us, and we very happily bought her for a dollar. 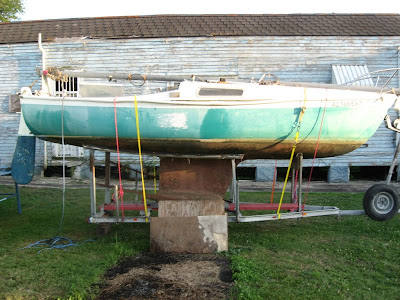 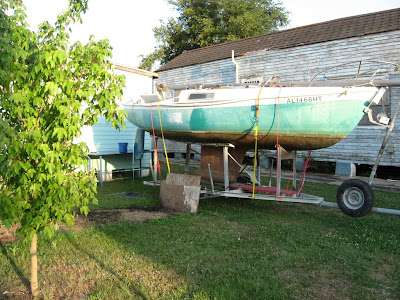 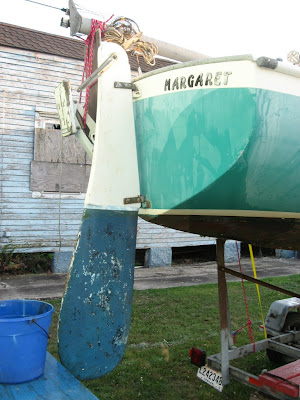 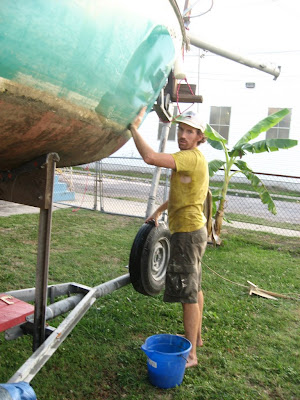 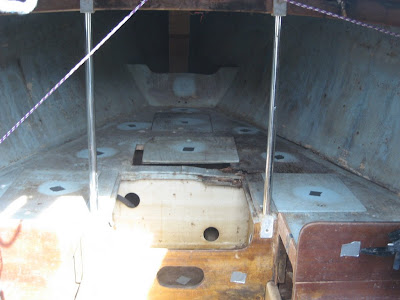